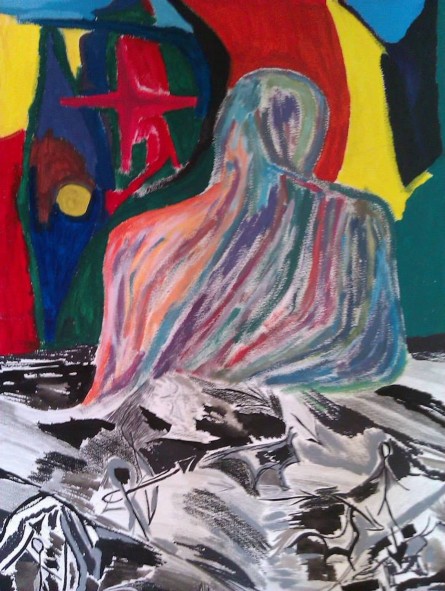 Original work made in paper

Be Strong is a painting I did to express the fact and reality of many people not to see the world around them. The character looks backwards, turns his back on the world and is between two parallel worlds at once: art and beauty and war and confrontation with the world around him.

I feel that I painted the feeling in which I was, the fact of being an artist and its hardness of not being accepted by everybody. The rebellion that the artist has to exert to be himself.

I would like the viewer to see the strength and struggle in which the character is debating and who is facing that. That feeling that emanates from the picture.

I chose the different materials to express all the painting: the gouache combined with the acrylic that gave saturation to the color and the image and at the same time that soft stroke of the character, contrasted with the bottom of the painting in which all the characters in white And black and gray with its minute touch of lines and composition; Give the work a special character